How Young Wolves Are Raised

Stan Tekiela shares with us his love for wolves in his amazing book The Lives of Wolves, Coyotes, and Foxes. Today he talks about how young wolves are raised.

Wolves are not so different from our own domestic dogs, and they hold a very special place in Stan Tekiela’s heart. Each time he gets a chance to see or photograph one or more of these wild canids, he is thrilled beyond words. Every encounter is remarkable and memorable. 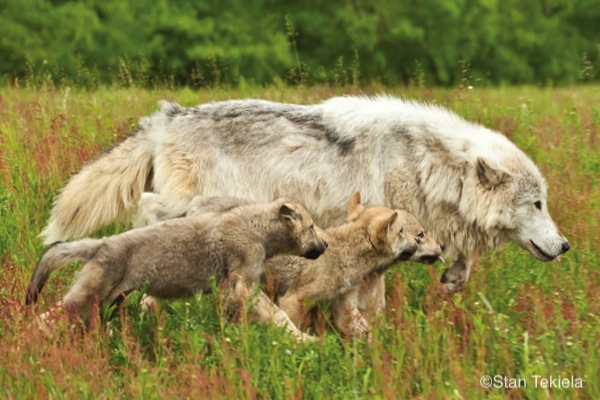 Wolves are a symbol of all things wild. They indicate an intact ecosystem, complete with top predators. As stewards of the environment, we have the responsibility to keep the ecosystem balanced by maintaining and supporting all wildlife, including animals such as wolves, coyotes, and foxes. It’s an honor and a privilege to share in the appreciation and safe-keeping of our wild and wonderful wolves.

Wolves don’t make homes of their dens. They use dens only for 8–9 weeks following the birth of pups. After the young wolves leave the dens, the wolves do not return, preferring to sleep outside. 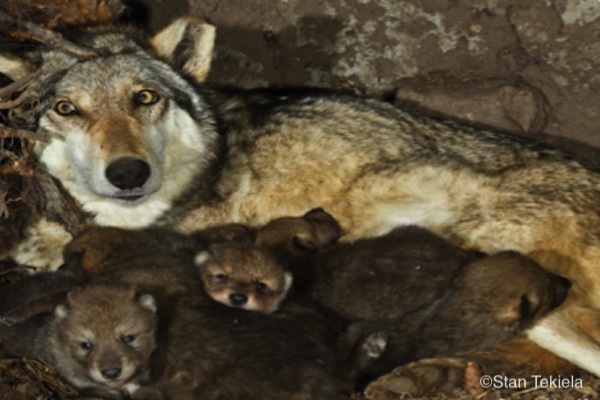 Some wolves dig several dens. If one floods or caves in during a spring thaw, another is ready to use. For any reason, when a mother senses the need to move her pups, she will grasp them gently in her mouth and carry them. They hang helplessly from her mouth and usually are silent during transport. Multiple dens can be far apart, taking time to reach, and the defenseless young benefit from the ride. if the pups ever stray too far from the den, the mother gathers them together and returns them to the den one by one. 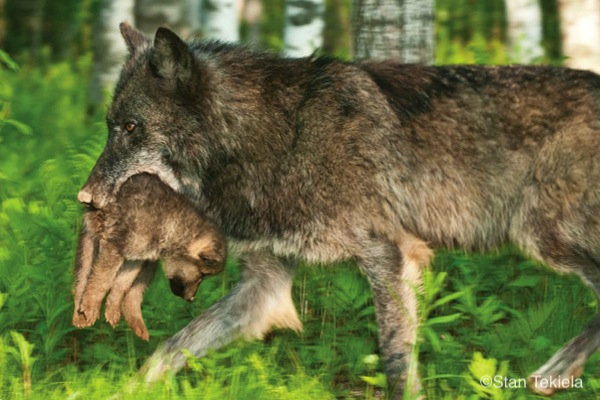 The average litter size for a healthy adult female wolf is six pups. The youngest documented female wolf to breed in the wild was 2 years of age, but most other young females just starting to reproduce are often unsuccessful the first time. As they age and get more experience, the chances for success increase greatly. Pups open their eyes at 12–14 days and start to move about and interact with their littermates. Eyesight is not well developed at this time, so they stumble around the dark den. Their eyes appear light blue in color.

At 20–24 days, the pups make their way to daylight at the den entrance. They spend increasingly more time outside the entrance at 4–5 weeks, playing and sunning themselves. This is an important time because they are starting to meet the adults in the pack for the first time. Their eyes are darker now, and the pups start to look like they will as adults. 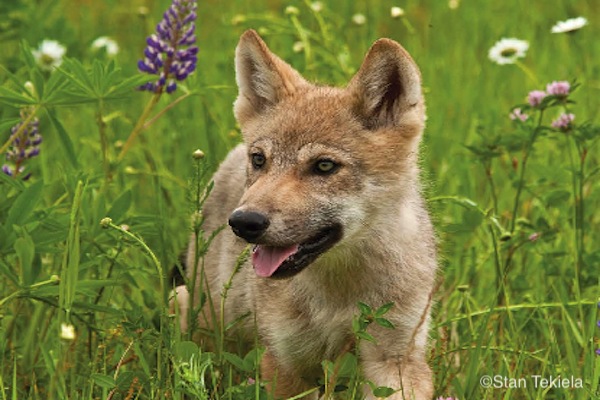 Canid pups spend a lot of time roughhousing at the den site. Leftover bones and fur from other meals become toys, and play-fighting and wrestling is a big part of their life. Wrestling, playing, stalking, and pouncing helps them build muscles, practice skills, learn limitations, and determine the litter’s pecking order. Much socialization occurs at this time and continues as they grow. Considering how important social interactions are in canids, these early behaviors are vital. 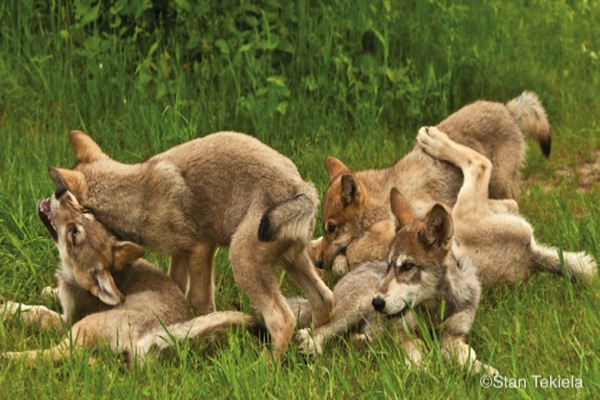 At 5–6 weeks, the pups have grown up enough to seek shelter when needed, but they’re still small enough for the mother to carry around. They are still feeding on milk and tall enough now to suckle from their mother while she is standing.

A big jump in development happens during ages 6–10 weeks. Pups change from toddlers to active members of the pack. Most notable is that the pups are starting to eat solid foods. Now each nursing session is less than a minute and spaced far apart. By week 10, the pups have been weaned from their mother’s milk.

Feeding pups at the den is a fast and furious event. When adults return from a hunt, the pups rush up  to them and start to lick their mouths. This behavior, called licking up, stimulates the adults to regurgitate food for the pups. Licking up is the main way pups are fed while they’re still too small to follow the pack. Providing nourishment for growing pups is a full-time job for the entire pack. Sometimes adults will carry a leg bone back for the pups to gnaw. 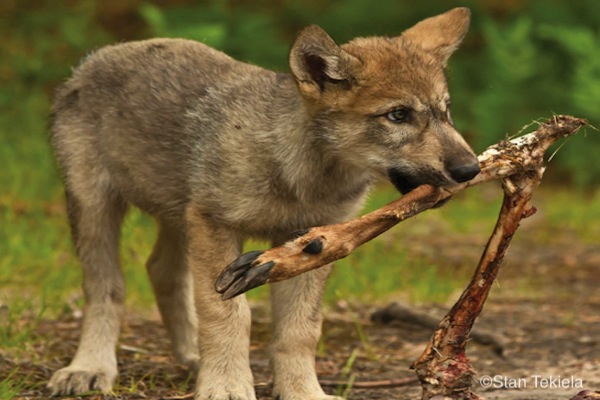 For any of the wild canids, learning to hunt is critical for survival. The desire to hunt and many of the skills needed to hunt and kill small game are innate in these animals. Starting at about 3 months, the pups follow their parents for short excursions and begin hunting around the den site by themselves. Pups stalk and pounce on their littermates from an early age and continue to practice these behaviors, which are essential for their future.

At 4 months of age, young wolves are not fully grown, but they are capable of following the pack and learning cooperative hunting. For a pack to take down much larger prey, the wolves must work together. Participating in a pack hunt teaches the young wolves all the skills they need to know for their future, whether they are hunting in a pack or when they are on their own.