The Indian Pipe, One of Nature’s Many Wonders

In today’s post, Stan Tekelia explains the Indian Pipe, also known as the Ghost Flower, one of nature’s weirdest plants.

There is nothing better than spending a late summer morning walking the woods in search of whatever interesting items you can find. Lately I’ve been out wandering the thick, cool forests on the lookout for familiar natural objects such as squirrels’ nests, various mushrooms, migrating birds, colorful wildflowers, all of which I consider to be old friends.

One of the more interesting things in the woods at this time of year is the unusual Indian Pipe (Monotropa unifora). Also called the Ghost Plant or Corpse Plant, the Indian Pipe grows late in the summer season and is found on the forest floor. Standing only 4-9 inches tall, you might overlook this unique plant. But what sets the Indian Pipe apart from all other plants in the forest is that it is pure white and sometimes pink. 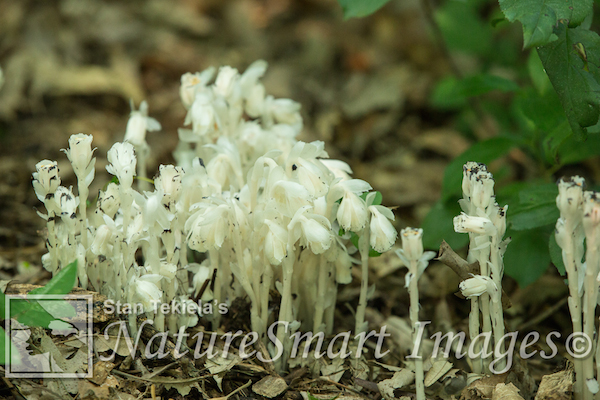 You see, the Indian Pipe is a plant without chlorophyll. Chlorophyll is the part of a plant that gives it a green color. It is also the part that takes in sunlight and produces food for the plant. Without chlorophyll, all plants would be white. The Indian Pipe doesn’t make food for itself like other plants but instead gets its nourishment through a mutually beneficial fungal and tree root (mycorrhizal) relationship. Ultimately, it gets its nourishment from trees. This is a very complex relationship that is still not completely understood.

Like all mycoheterotropic plants, it has a specific relationship with a fungal host. In this case, it is the Russulaceae group of mushrooms (often referred to as the Russula mushrooms). These mushrooms are often bright red or yellow and are common this time of year.

It might be that these plants have evolved away from using standard chlorophyll and sunlight to make food because they grow deep in the forest under the dark shadow of the tall trees, where sunlight is unable to penetrate.

Indian Pipe is a perennial plant, native to temperate regions of North America and other northern regions across the planet. Like other plants, the Indian Pipe has a single flower on each stem. The species name uniflora means “one flower,” describing its one bell flower per stem. After pollination, the hanging flower turns upwards. The genus name Monotropa means “one turn” and describes the single turn the flower makes. After the flower turns upward, the plant starts to turn black as the seeds start to mature.

It often grows in small clumps but can be seen as a single stem. The stem is waxy with tiny scale-like leaves that alternate on the stem. Of course, there is no reason to have large leaves if you don’t have to collect sunlight to make food.

In nature, there are never any absolutes. There is always an exception to the rule. The Indian Pipe is one of those rule breakers, and that’s one of the reasons why I enjoy seeing this plant. Also, I think the large clusters of Indian Pipe are very attractive and make good photographic subjects.

If you enjoyed Stan’s post, you may consider reading one of his amazing nature books, such as Majestic Eagles; The Lives of Wolves, Coyotes, and Foxes; or Backyard Birds: Welcomed Guests at our Gardens and Feeders. Young readers will delight in his award-winning children’s books Whose Butt?, Critter Litter, and (his latest) Jump, Little Wood Ducks. Also don’t miss his post on the wondrous world of mushroom foraging.