Few animals in the wilderness elicit such strong emotions in people as wolves. Loved by many who cherish wild places and intact ecosystems, wolves are however loathed by others who regard them as competition for natural resources.

Stan Tekiela, the author of The Lives of Wolves, Coyotes and Foxes lives in Minnesota, a state with more wolves than any other in the Lower 48. To Stan, the wolf is the symbol of all things wild—the epitome of wildness! Today, Stan shares with us his fascination for these mysterious mammals. 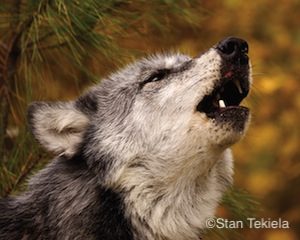 Living in close proximity to them makes me feel more connected to the wild, and for that I am grateful. Wolves, along with coyotes and foxes, are a group of animals that I’ve always found fascinating throughout my career as an author, naturalist, and wildlife photographer. I have been studying and photographing wolves for more than two decades, but I still get excited each time I see one through my viewfinder. I suspect this will always be the case because they are, strangely enough, lovable, intelligent creatures—much like the many domestic dogs I’ve known.

Early humans and wolves no doubt shared similar regions worldwide and competed for food. Both were top predators, living and hunting in family units and traveling to hunt for food. They both stayed in groups year-round and were fairly long-lived. Both used complex communication and taught survival skills to their young. Their coexistence must have led to many encounters, and humans must have noticed the similarities. This is in all likelihood how the relationship between wolves and people began.

The Spirit of the Wolf 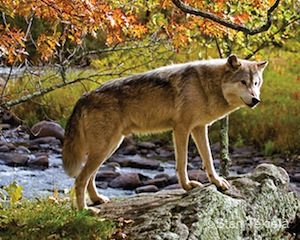 Some long-ago cultures around the world believed that wolves were their brothers. The early American Indians and other indigenous peoples also had a kinship with the wolf. While many tribes feared them and tried to eliminate local populations, others respected them for their power and even more for their intelligence. Both American Indians and First Nations people killed wolves only out of the need for fur for clothing and teeth and claws for trade, and they often made apologies to the sacred wolf. For them, the wolf didn’t represent something to fear or obliterate. They didn’t speak harshly about them or brag about killing them. To do that, it was thought, would offend the wolves and bring bad luck and hard times.

Early Indians of the American West and Great Plains saw the wolf as master of the hunting craft. They wore wolfskins when scouting for prey, believing it would help them hunt like the great wolf. They also believed that wolves understood their language and would even warn them about enemies nearby. Obviously, the spiritual relationship between people and wolves was close—and in some circles, still is today. Even now, the wolf continues to be regarded by some as a brother, teacher, and spirit guide.

The Arrival of the Colonists 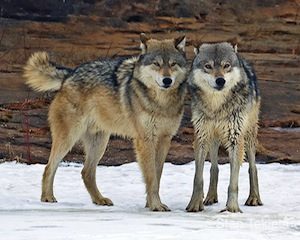 Based on Old World mythology, the European colonists brought to the New World a fear and hatred of wolves. Settlers depended on domestic livestock, unlike the native peoples, who were reliant on wild game. The wolf was seen as a wanton killer and competitor for food. Livestock was easy prey for them and needed to be protected. Eradication programs started right away. During settlement times, the rate at which wolves were killed reached a fevered pitch, and thus began the longest, most sustained, and relentless persecution of a species. Other animals, such as coyotes and cougars, were also targeted. In addition to the outright killing of wolves, populations of deer, elk, moose, and bison were decimated by hunters for the colonial marketplace. As large prey in the wild became scarce, the remaining wolves were forced to switch their diet to livestock. 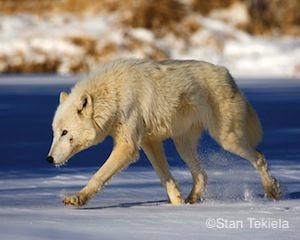 By 1905, the United States Congress established the Bureau of Biological Survey to eliminate all wolves and other large predators from all lands in order to protect livestock. At that time and in the decades to follow, the wolf was denigrated, and stories circulated that they were roaming around, killing livestock just for the sake of killing. The bureau generated many of these reports in an effort to maintain funding. In 1924, federal biologist Edward A. Goldman declared, “Large predatory mammals, destructive to livestock and game, no longer have a place in our advancing civilization.”

It wasn’t until the 1940s, when the wolf was eliminated from nearly all regions, that people started to speak out in favor of the wolf. Aldo Leopold (1887–1948), a conservationist who is considered the father of wildlife management, was one of the first to come to the defense of wolves. He himself had hunted wolves when he was young, but he wrote about his heartrending experience of watching an old wolf ’s “fierce green fire dying in her eyes” as a result of his gunshot, and it helped to change his ways. 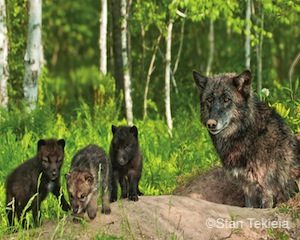 In 1944, Leopold proposed restoring wolves to Yellowstone National Park, where they had been completely eradicated for nearly two decades. Sadly, about 50 more years would pass before that restoration would even begin. Other conservation efforts and knowledgeable biological decisions about wolves were initiated during the 1950s–60s. With the birth of the environmental movement in the 1970s came the Endangered Species Act of 1973 and other major environmental laws. From these beginnings, many organizations formed to help protect and preserve wolves.

If you, too, are fascinated by these mysterious mammals, check out Stan Tekiela’s book The Lives of Wolves, Coyotes and Foxes.