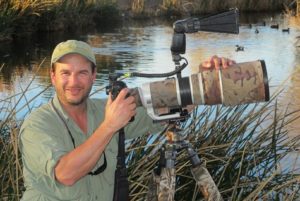 In this week’s column, Stan Tekiela shares with us his keen observations of mother nature at this special time of year, when reproduction is the name of the game.

Millions of birds of all shapes, colors, and sizes migrate back to the northland and join the resident non-migrators in a frenzy of setting up territories, attracting mates, constructing nests, and getting ready to breed.

All of this activity makes it appear that nature is moving at a frenzied pace. Birds are singing, fighting, chasing, gathering nesting materials, eating, and breeding. I have been spending a lot of time out watching and filming all of this activity. Here are a few of my observations from this spring.

It’s been fun watching a family of Hooded Mergansers who were nesting in one of my Wood Duck boxes. I have a small color camera with audio installed inside the nest box, which gives me an insight into all the sights and sounds of nesting behaviors. After nearly a month of seeing the birds just sitting and incubating the eggs, it is very exciting to watch and hear the hatching of the young.

We often imagine the hatching of baby ducks and mergansers as a passive experience, thinking that the baby birds struggle to get out of the eggs all on their own. Well, actually the mother is very active helping her chicks hatch. As soon as the chicks have a small hole pecked in the shell (which is called piping), the chicks are actively calling to the mother. The mother calls back with a soft reassuring sound. When the hole in the shell is large enough, the mother sometimes will slip her lower bill into the hole and bite off chucks of the shell. What is more interesting is that she often eats the shell. No doubt she is recapturing some of the calcium in the egg shell. The other day I photographed a female Wood Duck flying out of her nest box with nearly a full egg shell in her mouth. She even swam around with it. Soon she got it wet, started to peck at it, and then ate the entire shell.

I have watched a mother Wood Duck inside her nest box shake a shell with a chick inside so hard that the baby bird flew out of the shell and hit the side wall of the nest box. What a crazy way to enter the world.

After hatching, the babies stay in the nest for 1 to 3 days before jumping out into the world. The mother sits patiently while the babies jump up and down and crawl all over her. There isn’t much room in the nest box, so the babies use their mother like a playground. 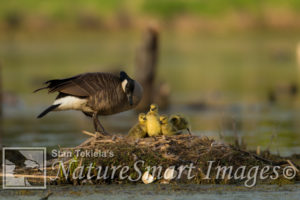 Recently I spent many days filming a Sandhill Crane nest (see the last column). Nearby, a pair of Canada Geese were incubating a clutch of eggs. One morning while I was watching, the goslings started to hatch. I could see the female shifting and moving around on the nest, seemingly unable to sit still. One by one the goslings hatched underneath her. The empty shells rolled down the side of the nest mound. The mother continued to sit on the newly hatched chicks for the next day.

The following day, I returned and was able to capture some interesting images of the mother, nest, chicks, and broken eggs all in one shot. Shortly after, the mother led her chicks into the water and swam away to join the male. It didn’t take long before a crow stopped by the nest and started to clean up the remnants left inside the shells after hatching.

The new goose family will join the new Sandhill family in the marsh for the rest of the spring and much of the summer. After the nesting season, the pace of life for the nesting birds slows and becomes rather mundane. Warm summer weather helps to slow things down. The days are long and the food is plentiful. The next busy time will be the fall migration.