In this week’s post, photographer, author, and naturalist Stan Tiekela reports about the bighorn sheep he encountered in the narrow mountain valley in western Wyoming. 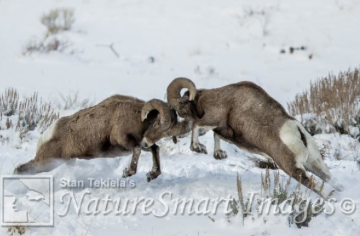 It was a picture-perfect winter day. The sky had a thin veil of clouds that would occasionally spit out large fluffy snowflakes that would drift straight down to the ground as if in slow motion. At other times the sun would peak out. The temperature was well below zero, and the best part was, there was no wind—it was calm and quiet.

I had been searching up and down this narrow mountain valley in western Wyoming for several days for bighorn sheep (Ovis canadensis). Suddenly, I heard a crack that sounded like a gunshot come from the steep rock cliffs above me, a sharp and clear crack that echoed off the valley walls several times before the valley fell silent again. I knew the bighorn sheep must be nearby.

Weeks (if not months) after the elk, moose, and deer rut, the bighorn sheep have theirs, starting in early December. I came to the mountains of western Wyoming to capture the grandeur and beauty of these wild sheep as the males battled it out to determine which male (ram) would mate with the females (ewes).

Bighorn sheep are animals of the high mountains and steep canyons. However, some have argued that this is only a result imposed by hunting pressures. Historically, they ranged from the high mountains into the foothills and well out into the eastern plains.

Sometimes called mountain sheep, the adult males have large, heavily ridged horns. Yes, technically, they are horns and shouldn’t be confused with antlers. These horns are permanent and stay on the ram throughout its life. Each horn sweeps backward and curls forward. The horns on the ram can be useful in determining the age of the male. There is a well defined rib marking for each year of growth. It takes about 7 or 8 years for the horns to curl completely around into what is called a “full curl” ram. These are usually the main breeders.

Often the tips of the horns are torn or broken in a condition called brooming. I have often wondered how the tips of the horns break because they seem so well protected by the rest of the horn. But, during a week of watching and filming, I witnessed many times the rams hooking horns, pushing and pulling, and putting all their body weight into a heavyweight shoving match. Many times the two rams, with their horns locked, would run at full speed for short distances, dragging one another around before unhooking. No doubt this is when the tips of their horns get damaged.

Over many days I watched small herds of 20 or more ewes and lambs accompanied by one dominant ram. But now and then a small band of large rams would descend out of the mountains seeking the fertile ewes. This is when the challenges and the legendary head butting would take place: the battle of the bighorns.

One day I came across four large rams. The resident male was trying to defend his females but was being constantly challenged by the other males. One by one the visiting males would approach the dominant male and push up against him. Then, using their front legs, the challengers would kick the belly or (many times) the groin of the resident ram. This was a clear sign of a challenge to fight. Oftentimes the resident ram would ignore the challenger. After a half a dozen kicks, the challenge would be accepted, the two would slowly back away from each other. Their eyes would bulge as they looked at each other, and they’d also cock their heads to the side.

Suddenly the two rams would rear up on their hind legs and charge each other, lowering their heads just before impact. It all happened in the blink of an eye. The results were always a loud cracking sound as their heads collided; it was so loud it often startled me. Even with my professional camera that captures 14 images per second, I was only able to capture a few frames of action. Over the week, I witnessed only 6 times the rams banging their heads together. Of those times I was able to capture four of the high-impact events. What an amazing week with a incredibly cool creature. Until next time…

If you enjoy Stan’s post you may consider one of his amazing nature books such as Majestic Eagles, The Lives of Wolves, Coyotes, and Foxes or Backyard Birds: Welcomed Guests at our Gardens and Feeders. Young readers will delight in his award-winning children’s books such  Whose Butt?, Critter Litter, and his latest book Jump, Little Wood Ducks.